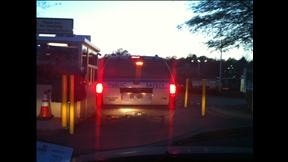 Police say the suspect died during an exchange of gunfire. One police officer was shot in the hand but will be okay.

Police used a flash-bang grenade to distract the suspect when they felt the firefighters were in “immediate danger”.

Five firefighters were originally taken hostage after responding to a reported medical call at the residence near Collins Hill Rd. and Taylor Rd.

The suspect let one man go to move the fire truck. The four remaining firefighters are all okay.