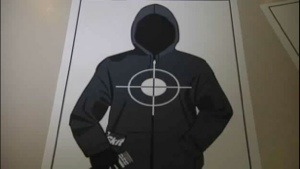 A Port Canaveral, Fla., Port Authority police officer who was fired for bringing shooting targets bearing a likeness of Trayvon Martin to a weapons training session said in a video posted online that his intentions for how the targets were to be used have been misunderstood.
“I would like to start my statement by first apologizing to the family of Trayvon Martin for being used as a pawn in somebody’s political agenda,” Sgt. Ron King said in a video posted on YouTube.
King confirmed to ABC News that he is the man in the video.
King, who had been with the department since January 2011, was fired Thursday, authorities said.
Port Canaveral Port Authority CEO John Walsh said that on April 4, when two fellow cops discovered King intended to use the Trayvon Martin shooting targets in their weapons exercise, they told the sergeant “they didn’t think it was appropriate.” The next day, Walsh said, the officers informed the Port Authority police chief, who called in internal affairs.
(Image Credit: ABC News)
In the YouTube video, King said he had no intention of using the targets for target practice, instead, he said he viewed the targets as a training tool for “a no-shoot situation.”
“As a result of last year’s Trayvon Martin shooting, a company offered for sale a target of a faceless silhouette wearing a hoodie with his hands in his pockets, one of which was holding two objects, these objects in the hand were non-threatening and the target was something that I viewed as a no-shoot situation,” he said.
“While others used it as a novelty, I view it as a tool for scenario based firearms training. Although to date, the targets have never been used, I did possess the targets for those training reasons,” he said.
The incident comes two months before the scheduled start of the second-degree murder trial of George Zimmerman, the neighborhood watch captain who told police he followed Martin because the teen was acting suspiciously. Zimmerman later told police he shot Martin in self-defense after the 17-year-old punched him in the face, knocked him down and began slamming his head into the pavement. Martin was unarmed.