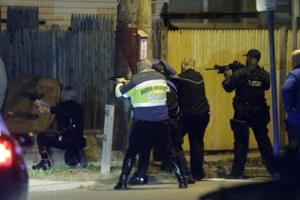 BOSTON—A late-night police chase and shootout has ended with one marathon bombing suspect dead and another on the run, police here said, leaving a grieving city on edge. One police officer was killed and another was seriously wounded during the violent spree.
At sunrise, Gov. Deval Patrick ordered a shutdown of all public transit and residents on the edges of Boston to stay indoors as a massive manhunt for the second suspect was underway.
“This is situation is grave and we are trying to protect the public safety,” said Massachusetts State Police Col. Timothy Alben, who ordered a temporary lockdown of Watertown, Waltham, Belmont, Cambridge, Newton, Allston and Brighton.
Federal agents swarmed Watertown after local police were involved in a car chase and shootout with the men identified Thursday by the FBI as Suspect 1 and Suspect 2. During the pursuit, officers could be heard on police radio traffic describing the men as having handguns, grenades and other explosives.
The mayhem began at approximately 10:20 p.m. Thursday when police said the bombing suspects robbed a 7-Eleven store in Cambridge. Minutes later, police said, the men shot and killed an MIT campus officer responding to the robbery call. The terror suspects then carjacked a Mercedes-Benz with the driver inside and fled, eventually letting driver go. They were then spotted in Watertown where they exchanged dozens of rounds of gunfire with patrol officers.
Suspect 1 was shot by police and brought to Beth Israel Medical Center. He arrived at the hospital under cardiac arrest with multiple gunshot wounds and blast-like injuries to his chest. The second suspect fled on foot, leading to the tense manhunt that is still underway at this hour.
“We believe this to be a terrorist,” said Boston police Commissioner Ed Davis. “We believe this to be a man who has come here to kill people. We need to get him into custody.”
A transit officer was seriously wounded during the exchange of gunfire, officials said.
The FBI has yet to publicly confirm a connection between the events in Watertown and the twin explosions that killed 3 people and injured 170 others at the Boston Marathon on Monday. But according to Boston police, the suspect who remained at large was the “one in the white hat” seen in the photos released by the bureau on Thursday.