Girl,2, Fatally shot in the chest by 5 yr Old Brother! Rifle Gift from his Parents 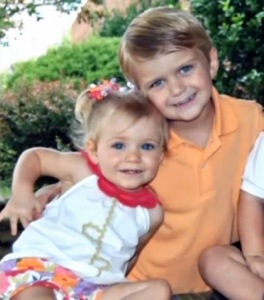 A single bullet to the chest killed the 2-year-old Kentucky girl shot by her 5-year-old brother clutching a “My First Rifle” — a tragic accident that could lead to charges.
Kristian Sparks shot his sister, Caroline, with a .22-caliber rifle around 1 p.m. Tuesday inside the family’s mobile home in rural Burkesville, Cumberland County. Their mother, Stephanie Sparks, was outside on the porch pouring grease out of a frying pan when she heard the gun go off, Kentucky State Police said.
A trooper didn’t initially anticipate charges being filed in the case, but said Wednesday that could change, the Lexington Herald-Leader reported.
“I think there is still some information that we don’t fully understand,” said Trooper Billy Gregory, adding that a grand jury could have the final say.
An autopsy on the tiny toddler was scheduled for Wednesday, with a memorial visitation set for Friday and a funeral service to be held Saturday.
Cumberland County resident Jeff Booher, 53, said learning how to use a gun is a rite of passage for many children who live in this area of southern Kentucky near the Tennessee border.

“People learn how to shoot before they learn how to read,” he told the Daily News.
Booher, who runs a tire shop, said he knows the Sparks family and described Caroline as a “little angel.”
Since guns are such a major part of life in the area, it’s rare that someone would be accidentally killed by a firearm.
“I think people will be a lot more careful after what happened,” Booher said.