Students Suspended and Banned from Prom and Graduation for TWERK Video 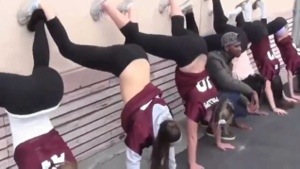 Dozens of students in San Diego have been suspended and barred from attending their high school prom after a video showing them twerking went viral and was seen by school administrators.

That policy bans “verbal, visual or physical conduct of a sexual nature in the educational setting,” which officials say applies to the participants in the video.

Another student says she hopes to lead a civil rights movement of sorts: “Suspended for twerking. What do I do? Twerk. At the beach. I twerk at the beach.”

Others are joining the twerk revolution, too: “To show support for everybody getting suspended, we should all twerk at once at lunch #freethetwerkteam.”

“This seems like a bad idea that might just get prom and graduation canceled. Though if you can’t twerk at prom, what’s the point, am I right? #TWERKorDIE”