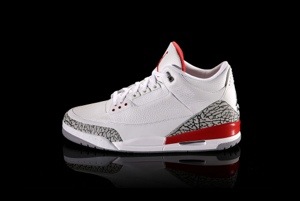 The Jordan Brand, a division of Nike, is responsible for the vast majority of MJ’s earnings. Jordan partnered with Nike after being drafted by the Bulls out of North Carolina in 1984. The original five-year deal was worth $500,000 annually, plus royalties. The terms of Jordan’s current deal with Nike are a closely guarded secret, but royalties now generate more than $60 million annually for MJ, according to sources.

Nearly 30 years later, the brand is still a marketing juggernaut. It controlled 58% of the U.S. basketball shoe market in 2012, according to research firm SportsOneSource. The Jordan Brand’s parent, Nike, was second with a 34% share, while Adidas (5.5%), Reebok (1.6%) and Under Armour (0.6%) divvied up the leftovers.

Nike signed up current NBA stars Carmelo Anthony, Blake Griffin and Chris Paul, as well as non-NBAers like Derek Jeter and Nascar’s Denny Hamlin for the Jordan Brand. But the star is still Jordan and the Air Jordan franchise.

Nike will release the Air Jordan XX8 this weekend to coincide with the NBA All-Star game. It is the 28th shoe in the Jordan franchise. The suggested retail price is $250. In addition to new Air Jordans, Nike continues to pump out retro versions of the franchise with an average selling price of $130 to $150.