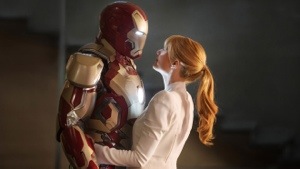 LOS ANGELES – Iron Man reigns as the standard-bearer of Hollywood superheroes with a $175.3 million domestic opening weekend for his latest sequel and an overseas haul of a half-billion dollars in less than two weeks.
According to studio estimates Sunday, “Iron Man 3” has raced to a worldwide total of $680.1 million. That includes $175.9 million in its second weekend overseas, where the film has rung up $504.8 million so far.
No other solo superhero — not even Batman or Spider-Man — has managed this kind of business.
Yet the future of Marvel Studios’ flagship franchise is in the hands of a mortal man with no metal armor, gadgets or special powers, other than his ability to rebound from Hollywood pariah to hottest star on the planet.
“Iron Man 3” hints that Robert Downey Jr.’s Tony Stark might hang up his high-tech suits and live a normal life from now on. As the centerpiece behind not only the “Iron Man” flicks but also Marvel’s superhero ensemble “The Avengers,” Downey seems crucial to this comic-book world.
Could Disney’s Marvel Studios conjure anywhere near the same magic if it relaunched “Iron Man” with another actor? Without Downey, would the upcoming “Avengers” sequel have quite the same appeal as last year’s record-grossing first installment?
“Your guess is as good as mine,” said Dave Hollis, head of distribution for Disney. “Marvel has found a way to tell interesting stories with a variety of characters over time, and it will continue to do so.”
“Iron Man 3” had the second-biggest domestic debut ever, behind the $207.4 million start over the same weekend last year for “The Avengers,” which teamed Downey’s Stark with other Marvel Comics heroes. The new sequel surpassed the $169.2 million opening for 2011’s “Harry Potter” finale, the previous second-place debut.
In just nine days, the film shot past the $312 million international total for “Iron Man 2” in its entire theatrical run.
Among the overseas totals so far: $63.5 million in China, $42.6 million in South Korea, $38.3 million in Great Britain and $35.8 million in Mexico.
Domestically, “Iron Man 3” far outpaced the franchise’s first two movies. “Iron Man” launched the series with a $98.6 million domestic debut in 2008, while 2010’s “Iron Man 2” opened with $128.1 million.
The film also opened higher than last year’s Batman finale “The Dark Knight Rises” ($160.9 million) and the biggest of the Spider-Man movies ($151.1 million for “Spider-Man 3”).
If Downey doesn’t sign on for more, it would leave a gaping hole in the expanding superhero universe Marvel is taking to the big-screen.
“I honestly don’t know how you can go on with that character without Downey,” said Paul Dergarabedian, an analyst with box-office tracker Hollywood.com. “I think he’s as important to this franchise and to Marvel as any actor is to any character.”
Downey seems just as vital to “The Avengers.” That ensemble probably could thrive without him, given how the first film and previous solo superhero adventures have established a team that includes Chris Hemsworth’s Thor, Chris Evans’ Captain America, Scarlett Johansson’s Black Widow and Mark Ruffalo’s Hulk.
But without Downey, Marvel might have to settle for something less than the colossal $1.5 billion worldwide results for “The Avengers.”
“He’s the spark that ignites all those characters, it seems,” Dergarabedian said. “He’s the lead guitarist, and they’re just all kind of following him.”
Before convincing reluctant Marvel executives that he was the man to put on the metal suit, Downey still was trying to live down drug addiction and jail time in his 20s and 30s that nearly ruined his career.