U.S. to allow Plan B access for all ages 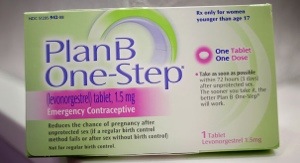 The Obama administration indicated Monday that it would end its legal battle to block the “morning-after” pill from being available over the counter without age restrictions.
Just weeks after vowing to fight District Judge Edward Korman’s April ruling to eliminate previous age restrictions, the Justice Department told a court of plans to drop its appeal if the court approves

When finalized, the move would end a long-running dispute over emergency contraception dating back to the early years of George W. Bush’s presidency — a legal fight that forced the Obama administration to take a position on the availability of the controversial product in late 2011, just as the 2012 election fight was heating up — and make “Plan B” pills readily available on the shelves of drug stores nationwide.

It would also reverse the Obama administration’s longstanding insistence that access be limited to those age 17 or older — a controversial decision initially made by Health and Human Services Secretary Kathleen Sebelius, and supported by the president.
The position, which bucked the FDA’s recommendation that the pills be available to people of all ages, drew public outcry from Democrats, abortion rights advocates and medical groups such as the American College of Obstetricians and Gynecologists.
The administration’s new plan for compliance includes asking both Plan B manufacturer Teva Pharmaceuticals and the maker of a generic version of the pills to submit new drug-label applications to allow the products to be sold without age restrictions.

Once those applications are received, the Justice Department said, it’s expected that the Food and Drug Administration will approve them “without delay.”
The administration had previously signaled that it would challenge Korman’s April ruling ordering the elimination of all age restrictions for purchase of the morning-after pill within 30 days. The FDA responded by easing its restrictions to age 15 and up — but that did not satisfy Korman, of the Eastern District of New York, who said last week that he would order the immediate unrestricted sale of a two-pill version of emergency contraception.
In rejecting the administration’s requests, Korman said the government’s push to maintain age restrictions was ‘‘politically motivated, scientifically unjustified and contrary to agency precedent.’’