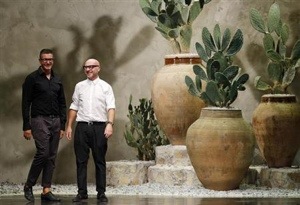 (Reuters) – Fashion designers Domenico Dolce and Stefano Gabbana were handed a 20-month suspended prison sentence and a heavy fine on Wednesday for hiding hundreds of millions of euros from the Italian tax authorities.

The design duo, who are nearly as famous as the stars they dress, were not present in court in Milan and will lodge an appeal against their conviction on charges that they have always denied.

“We will read the reasons for the verdict, and we will appeal,” Massimo Dinoia, one of the pair’s defense lawyers, said after the hearing.

Public prosecutor Gaetano Ruta had asked for a two-and-a-half year jail term. However, the two designers will have to pay 500,000 euros as a first instalment of a fine that could reach 10 million euros ($13.4 million).

The judge acquitted the pair of charges that they had filed inaccurate tax returns.

The success of Dolce and Gabbana’s sexy corset dresses and sharply tailored suits favored by celebrities such as Kylie Minogue, Kate Moss and Bryan Ferry have earned them a glamorous lifestyle. In 2009, they hosted popstar Madonna, a friend and client, for her birthday at their villa perched above the chic Mediterranean resort of Portofino.

The case involves an investigation that began in 2008, when authorities tried to crack down on tax evasion as the financial crisis began to bite. But the Dolce and Gabbana inquiry is one of the few high-profile cases to come to trial so far.

The judge ruled that the pair sold their brand to Luxembourg-based holding company Gado in 2004 to avoid declaring taxes on royalties of about 1 billion euros ($1.3 billion).

Public prosecutor Laura Pedio told the court in her closing arguments that the designers were “well aware that they would reap a tax advantage from this transaction.”

Gado is nothing but a shell company that took no administrative or financial decisions, said Pedio. “Gado is a radio relay station,” she said. “The orders originated in Milan, and bounced from Luxembourg back to the Milan offices where the decisions regarding the brands were made.”

Dolce and Gabbana’s three lawyers said in a statement they were “frankly stunned” by the verdict and were “certain that that it will be overturned on appeal.”