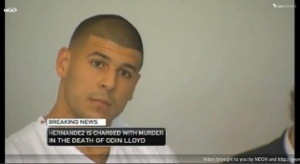 Former New England Patriots tight end Aaron Hernandez was charged with murder and five other gun-related charges on Wednesday.
Hernandez had been questioned in the killing of Odin Lloyd, an associate of Hernandez who was found dead near Hernandez’s house.
Hernandez was transported by police to his arraignment at Attleboro District Court and arrived at the courthouse just before 2 p.m. Eastern. He was mostly expressionless as he heard the charges read in the courtroom.
Multiple reports said Lloyd’s family was in the courtroom for Hernandez’s arraignment.
Hernandez is currently without a job, having been cut by the Patriots shortly after his arrest, but the NFL said in a statement that Hernandez “will have his day in court.” There is precedent in a player having a very successful career after facing serious charges.
Ray Lewis was charged in murder in 2000, in connection to the deaths of two men outside an Atlanta nightclub. Lewis eventually pleaded guilty to obstruction of justice and the murder charges were dropped. Lewis never missed a game because of that legal situation and played with the Ravens through last season, when he won his second Super Bowl with the team.
Lloyd’s body was found on June 17 near Hernandez’s house. Police have investigated in and around Hernandez’s house since then.
The prosecutor offered some details of the charges against Hernandez. Hernandez was seen with Lloyd at 2:30 a.m. the morning he was found dead, according to the Boston Globe’s Wesley Lowery, one of the reporters in the courtroom. Hernandez’s phone included texts to Lloyd and two friends the night of the murder. According to Lowery, the prosecutor said police have Hernandez on tape with a firearm saying “you can’t trust anyone anymore” before picking up Lloyd.

Documentary ALI & CAVETT: THE TALE OF THE TAPES