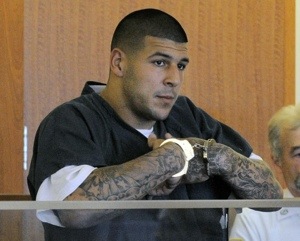 The double homicide, a brutal attack last July 16 on a car stopped at a traffic light, occurred one month before the Patriots signed Hernandez to a $40 million contract extension, raising the chilling possibility that the region’s beloved NFL franchise carried a double murderer on the roster last season.

The unsolved crime may also supply a motive for the killing of Odin Lloyd on June 17: Investigators believe Lloyd may have had information linking Hernandez to last year’s double slaying, the officials said.

“The motive might have been that the victim knew [Hernandez] might have been involved,” one of the officials said. Boston police were at Hernandez’s home late Thursday as part of their investigation, according to another law enforcement official.

In a Fall River courtroom Thursday, Hernandez, 23, who was released by the Patriots just after his arrest, watched in silence as his lawyer pleaded for bail on the murder charge. Lloyd, 27, was found dead, shot through the arm, twice in the back, and twice in the chest in a secluded section of an industrial park near Hernandez’s home in North Attleborough, prosecutors said. The weapon, a .45-caliber handgun that prosecutors believe was manufactured by Glock, has not been found

Hernandez is now being investigated in a July 2012 drive-by double homicide on Shawmut Avenue in the South End.

Superior Court Judge Renee F. Dupuis denied Hernandez’s request for bail and said from the bench that the case against him is “circumstantial, to be sure, but very, very strong.”

A second man questioned by police investigating Lloyd’s death was arrested Wednesday in Connecticut. Carlos Ortiz, 27, of Bristol, Conn., Hernandez’s hometown, waived his right to fight extradition and will face charges in Attleboro District Court of carrying a firearm without a license. Authorities issued an alert late Thursday for a third man, identified as Ernest Wallace, most recently of Connecticut, who they said was wanted as an accessory after the fact in Lloyd’s slaying and is considered armed and dangerous.

Hernandez’s lawyers had asked the judge to set bail at $250,000 cash, with conditions including GPS monitoring and possibly house arrest, as well as the requirement that Hernandez surrender his passport.

“There is no eyewitness testimony,” argued Hernandez lawyer James Sultan. “There has been no indications of any direct evidence as to who shot the decedent, who was present when the decedent was shot, whether there was a plan to kill the decedent, and any other indication that if there was such a plan, Mr. Hernandez was part of it.”

He added that Hernandez could not jump bail and flee even if he wanted to, due to his famous face and the publicity surrounding the case.

“He wants a speedy trial,” Sultan said. “He wants to clear his name.”

In response, prosecutor William McCauley presented new details of the investigation, saying police recovered ammunition for a .45-caliber firearm at a condominium Hernandez leases, which matched the caliber of ammunition used to kill Lloyd. That condo is in Franklin, neighbors say. Additionally, McCauley said, police found a magazine for a .45-caliber weapon inside a Hummer belonging to Hernandez. He also cited a photograph circulated by the website TMZ that appears to show Hernandez holding a .45. TMZ reported that the photo was taken in Florida in 2009.

Prosecutors have said that video recovered from security cameras shows Hernandez and two other men picking up Lloyd in Boston early on June 17 and later driving into the industrial park where Lloyd’s body was discovered. The car drove out minutes later, prosecutors say, and headed to Hernandez’s house on Ronald C. Meyer Drive, where the player’s own security cameras recorded Hernandez holding a handgun.

Hernandez showed no emotion as he was led away. His girlfriend appeared distraught as she left the courtroom.

Outside the courtroom, Sultan said that the decision was unfair and that the defense team is considering an appeal.

“He’s a very strong young man, and he’s doing the best he can,” Sultan said.

In court papers unsealed Thursday, State Police investigators said they interviewed Ortiz in Bristol on Tuesday. During the questioning, Ortiz allegedly admitted that he was in North Attleborough on the day Lloyd was killed and that he was armed at the time with a gun. There is no mention in the documents of Lloyd’s killing. In court papers, Ortiz is accused of illegally possessing the gun at Hernandez’s home.

A search of court records found a number of convictions for a man matching Ortiz’s name and birth year in Connecticut, including for larceny, making threats, and assault.

No one answered the door at Ortiz’s listed address in Bristol Thursday afternoon. Alan Libby, 51, who rents a garage near Ortiz’s apartment, said he sees Ortiz occasionally, but has never met him. About a month ago, two police officers took Ortiz out of the apartment in handcuffs, Libby said. He said Ortiz was back at the apartment a week later.

Prosecutors have not yet publicly offered a compelling motive for Lloyd’s slaying, other than to say that Hernandez was upset Lloyd had spoken to people Hernandez “had some troubles with” while they were out together June 14 at a Boston nightclub.

Asked by Dupuis about motive, McCauley offered to speak privately with the judge about information he was not ready to make public.

Prosecutors also have not confirmed the identities of the other men in the car that picked up Lloyd the night he was killed. But in court Thursday, McCauley suggested that authorities heard a description of the events in the car from one of the other men.

“There was a conversation that then occurred in the car when [Hernandez] gets into an argument, saying to the victim he’s unhappy with him talking to these individuals and can’t trust him anymore,” McCauley said, describing events only the passengers could know.

Investigators familiar with the 2012 double homicide in Boston believe the shooting stemmed from a fight at Cure, a club in the Theatre District, between two men and a group that included Hernandez.

The two men, Daniel Abreu and Safiro Furtado, friends who grew up in Cape Verde, left the club with three other men in a BMW sedan. Abreu, who was driving, stopped at a light on Shawmut Avenue at Herald Street when a silver or gray sport utility vehicle with Rhode Island plates pulled alongside.

Someone from the SUV opened fire, killing Abreu, 29, and Furtado, 28. Another passenger was wounded. Two others fled the car unharmed.

The attack mystified the victims’ families and police, who said the men had no ties to crime or criminals.

Investigators probing the 2012 homicides had heard that Hernandez was at Cure the night of the double killing, but he was not a suspect at the time, one of the officials said.

Detectives decided to look more closely at Hernandez in connection with the crime after State Police began investigating him in Lloyd’s slaying, the official said.

Suffolk District Attorney Daniel F. Conley declined to comment on specifics of the investigation, but he said that the case, once cold, has become more “robust” recently.

“We are following every lead, as we always do in these cases,” Conley said. “We believe we are making progress, but at this moment in time it’s too premature to name any one individual as a suspect.”

The scene was quiet Thursday night outside the Franklin condominium that police had searched in connection with the Lloyd case.

Carol Bailey, a retired resident of the well-kept development, said Hernandez and a cousin named George moved into a unit next to hers in May.

She said that she saw Hernandez only a couple of times, and that he was curt when she introduced herself.

Documentary ALI & CAVETT: THE TALE OF THE TAPES