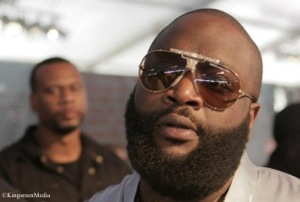 Rick Ross has been served with a fresh new lawsuit.
Ross bought 3 Rolexes for just under $90,000 last year, but so far hasn’t paid the bill, according to the details of the lawsuit
Johnny’s Custom Jewelry in Texas filed the suit against Ross and his company Maybach Music, claiming the rapper agreed to purchase 3 diamond Rolexes last August for a total of $89,847.50, reports TMZ.
The three Rolex timepieces, according to Johnny’s, include one 18K gold watch with 30CT of diamonds ($55,000), one 18K gold watch with 7CT of diamonds ($14,000), and one two-tone watch with 5CT of diamonds ($14,000).
Johnny’s says it delivered the watches as ordered, but Rick still hasn’t held up his end of the deal. Now, Johnny’s wants Ross to come up the money owed, plus interest.