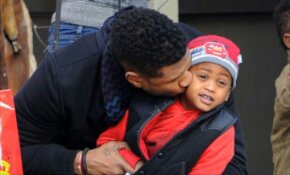 According to a police incident report obtained by omg!, Usher’s oldest son was playing in the pool with his aunt when he attempted to get a toy that was caught in the pool drain and his arm got stuck. The aunt and a maid tried to rescue him, but were unsuccessful. Two audio-visual subcontractors heard cries for help and eventually freed the boy.

“The Voice” mentor was not home at the time.

One of the subcontractors gave Usher’s son CPR and was able to revive the boy. Upon hearing the news, the singer rushed to his son’s side, who was rushed to the hospital and held overnight for observation.