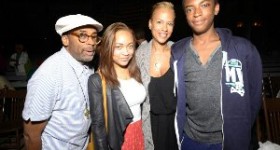 Screenwriter/producer Tonya Lewis Lee brought her family to Martha’s Vineyard yesterday for a special screening of her upcoming Hallmark Channel film “The Watsons Go to Birmingham.” Filmmaker Spike Lee was on hand to support his wife, who presented the film to about 300 guests at the Tabernacle.