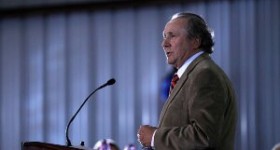 Michael Reagan, son of former President Ronald Reagan, slammed the historical accuracy of the movie “The Butler,” saying it inaccurately portrayed his father as “racist.”

Reagan penned a scathing review published Tuesday on the website Newsmax, calling the film “a bunch of lies.”

“There you go again, Hollywood,” Reagan wrote. “You’ve taken a great story about a real person and real events and twisted it into a bunch of lies. You took the true story of Eugene Allen, the White House butler who served eight presidents from 1952 to 1986, and turned it into a clichéd ‘message movie.'”