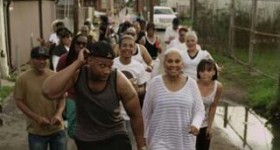 Miss Robbie Montgomery, the feisty star of the hit OWN docu-series “Welcome to Sweetie Pie’s,” has released a new original song and accompanying music video “Do the Sweetie Pie,” available today on www.oprah.com/SweetiePiesMusicVideo.

Written by Miss Robbie’s son Tim Norman, “Do the Sweetie Pie” is based on a “slide dance” performed by the 73 year-old restaurant owner who spends many weekends out dancing with her friends.  The song debuted on “The Tom Joyner Morning Show” today.

“It was my first time recording in Lord knows how many years,” remarked Miss Robbie, a 1960s backup singer and former Ikette.  “After my lung collapsed, doctors told me I’d never be able to record again, but you never know what God has in store for you and you’re never too old to try.  When my son Tim wrote the song for me I thought it would be a fun thing to do together—don’t just chase your dreams, catch them.”

“It started out as a birthday gift for my mother,” says Tim of the project’s origins. “Even though she sang for years, she didn’t have a song of her own and I wanted to do something special for her that we could create together—something she would really remember.”

Both hope the “Sweetie Pie” will eventually join the ranks of other classic slide dance traditions such as the Electric Slide, the Wobble and the Cupid Shuffle.