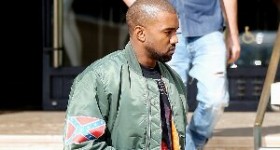 Kanye West does not care if his Confederate flag merchandise is creating controversy — in fact, he took it one step further on Monday, Nov. 4 by wearing a jacket emblazoned with the mark to Barneys in Beverly Hills.

During an Oct. 25 concert in Las Vegas, West blasted Barneys on-stage after the embattled retailer faced accusations of racially-profiling black customers in stores. (The controversy became so big that his Watch the Throne collaborator Jay Z, who collaborated with Barneys for a special holiday collection, had to address the partnership in a statement). An incredulous West reacted during his performance of “New Slaves”: “Don’t touch anything in the store. Excuse me, that’s that ‘Can I help you sir?’ That’s that racial profiling out in front of Barneys and sh-t. Talking about, ‘Did you steal that?'”