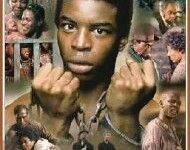 Thirty six years after “Roots” changed television and helped steer the course of racial discourse in the United States, the A&E-owned cable channel is working on a remake of the iconic miniseries.

History bought the television rights for the project from Mark Woloper, son of David Wolper, the original producer on the ABCmini-series, and the estate of author Alex Haley, who wrote the book, “Roots: The Saga of An American Family,” according to Deadline.com.

The original miniseries, which starred LaVar Burton as the slave Kunta Kinte, was a national phenomenon when it aired over eight nights in January 1977.

3 thoughts on “‘Roots,’ landmark slavery mini-series, to be remade by History”