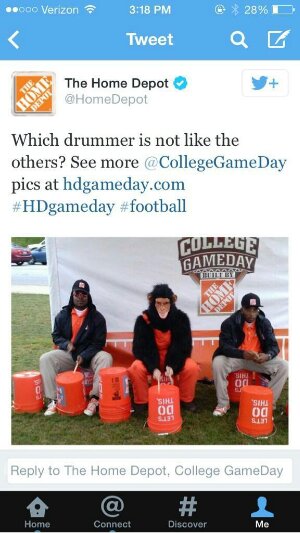 Home Depot was under fire Thursday for sending out a racist tweet that got an employee fired. The photo for ESPN show “College GameDay,” which Home Depot sponsors, showed two African-American men drumming, flanking a third in a monkey suit, and asking, “Which drummer is not like the others?”

Almost immediately following the post, which was reposted by Twitter user @imfromraleigh, the Atlanta-based home improvement retailer issued a public apology, adding that it fired the employee who sent out the offensive tweet.

“We have zero tolerance for anything so stupid and offensive. Deeply sorry. We terminated agency and individual who posted it,” Home Depot tweeted. The photo was immediately deleted, but it still lingersonline.

The retailer told NBC that it is “also closely reviewing our social media procedures to determine how this could have happened, and to ensure it never happens again.”

Home Depot has also been sending out individual tweets to people who complained online, like Twitter user @OfficiallyIce, who wrote: “Hey @NAACP, when y’all get a minute, check this @HomeDepot tweet out.” Home Depot responded: “@OfficiallyIce @NAACP We are deeply sorry for the dumb tweet and have deleted it.”