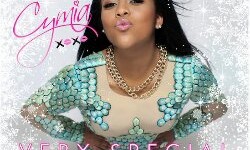 Teen pop princess Cymia will release her new Christmas single entitled,  “Very Special Christmas” on Thanksgiving Eve, in celebration of her 4th annual Holiday Pajama Drive.  Cymia came up with the idea for the holiday drive to donate new “Christmas” pajamas to children residing at the Ronald McDonald House.  Cymia was the brainchild behind the entire drive because she wanted the kids at Ronald McDonald house to be able to experience “Christmas magic” with their families.  Cymia says “Very Special Christmas” speaks to the spirit of the season and what is most important during the holidays. “To me the most magical time of Christmas is when you are sitting around in your pajamas on Christmas morning with family,” she explains.

While the holidays are common ground for celebrity charities and non-profits, those close to Cymia know her pajama drive is straight from the fifteen-year-old star herself.  “When people meet Cymia they can see she’s a superstar, but what’s even more remarkable to me is that she has such a great heart,” says manager Ron “Tricky” Montgomery.  Cymia’s 2013 Holiday Pajama Drive extends to Charlotte, NC   Cleveland, OH and Atlanta, GA.  The drive kicked off November 1st and will run until December 20th.  Donations for new pajamas are being accepted at all three Ronald McDonald Houses up untilDecember 20, 2013.  To celebrate the success of the drive Cymia will visit the children and perform, “Very Special Christmas” at the Atlanta-based Ronald McDonald House located at 795 Gatewood Rd NE, Atlanta, GA.  A portion of proceeds generated by the song will also be donated to the Ronald McDonald House.

Besides heading up her own holiday drive, Cymia is busy working on her upcoming album for 2014. A triple threat, Cymia also has several film projects in the works, which will be released over 2014. Cymia’s previous film credits include “The Curious Case of Benjamin Button”,“Dear Diary”, “Phased” “Bolden” and Roadhouse: Last Call” along with several TV/Film projects slated for release in 2014.

To learn more about CYMIA visit:

Enchanted Branding & Public Relations is a multimedia marketing, branding and public relations agency with headquarters in Atlanta, GA and a partnership office in New York City. Enchanted Branding and Public Relations specializes in fusing creativity with strategic industry know-how to create impressionable and measurable customized campaigns, especially as it relates to entertainment/arts. Our agency has worked with top talent to segue their careers into alternate dimensions by cross-branding and promotion, exposing them to a larger consumer fan base. Enchanted Branding & Public Relations actively seeks exposure for clients that include television, print, radio and sponsorship opportunities. We strive to create opportunities for our clients relevant to their career goals and aspirations.