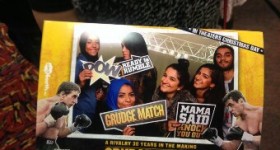 Yesterday I had the pleasure of attending the private screening of Grudge Match. The movie had a power cast featuring Sylvester Stallone, Robert De Niro and the hilarious Kevin Hart. Atlanta’s socialites came out to attend the screening that was hosted by V-103’s radio personality, Big Tigger and Former NFL Player Kordell Stewart. Big Tigger was in good company with his rumored new girlfriend, Keshia Knight Pulliam. Kordell and Big Tigger did an awesome job as hosts, interacting with the crowd and taking photos with fans. The interactive screening was different then most screenings with a very intimate number of media that were able to enjoy the Grudge Match themed games, photo booth, prizes and complementary drinks. Overall the movie was hilarious and a definite must see for the whole family. Grudge Match will be hitting the theaters on December 25th, let us know if you plan on seeing it!

photos by Talking with Tami