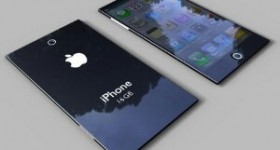 iPhone 6 with a hollow display cover?

According to the site, the patent describes a “hollow display cover structure.” That hollow cover could then be formed from some kind of “elongated member” with an inside surface. It could be shaped like a cylinder, a tube or any other shape that is hollow. It’s interesting to note that Apple Inc. (NASDAQ:AAPL) is experimenting with this type of technology given the design of its new cylindrical Mac Pro computers. The design is meant to maximize efficiency and power, but it looks, quite frankly, space-age. If the iPhone 6 features a display like the one that is described in this patent, the effect could be similar.

The patent also describes the materials which could be used to make this hollow display. It includes sapphire, which makes sense because we know Apple Inc. (NASDAQ:AAPL) sunk a huge chunk of money into a company which makes sapphire glass. There’s been speculation for months now that the iPhone 6 would use sapphire glass because of Apple’s investment. In addition to sapphire, Apple also lists other crystalline or transparent materials.

Some have speculated that the iPhone 6 would feature a curved display, although this patent describes a display that is actually flexible over a longitudinal axis. It would use an OLED display wrapped around an axis to cover the hollow structure. In addition, the patent states that the device would have touch sensors, an accelerometer and gyroscope and other input sensors. It also covers other features the iPhone 6 might have, like tilt to scroll and gesture control. The flexible display would even go further and scroll along with the rotation and movement of the device itself.

The International Poverty Forum will take place at Porsche North American Headquarters in Atlanta Caring For Others, a 501(c)(3) on...