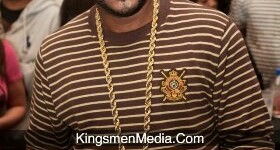 Young Jeezy has been arrested in Atlanta for battery, false imprisonment, and making terroristic threats against his son.

Documents show that Jeezy, born Jay Jenkins, allegedly got into a fight with his son in a bathroom. The documents obtained by TMZ say he threw his son into the glass shower door, causing the son to hit his head. Then, Jeezy allegedly punched him in the face, dragged him into the bedroom, threw him on the bed and pummeled him. When he son tried to escape, he was blocked by Jeezy’s bodyguard.

The documents add that Jeezy subsequently choked his son and said, “I will kill you.”

According to police docs, Jeezy’s son claims his dad said, “I will put a bullet in your head right now,” adding, “If I could get away with it, I would kill you.”

The ATL rapper turned himself in on Friday and was released on a $45,000 bond.