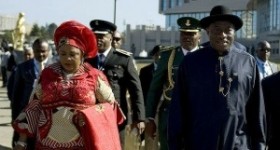 Nigerian President Goodluck Jonathan has signed a law this month that bans same-sex marriage and criminalizes homosexual associations, societies and meetings, with penalties of up to 14 years in jail.

The Associated Press obtained a copy of the Same Sex Marriage Prohibition Act on Monday that was signed by the president and dated Jan. 7.

It was unclear why the law’s passage has been shrouded in secrecy. The copy obtained from the House of Representatives in Abuja, the Nigerian capital, showed it was signed by lawmakers and senators on Dec. 17, though no announcement was made.

Secretary of State John Kerry said Monday the United States was “deeply concerned” by a law that “dangerously restricts freedom of assembly, association, and expression for all Nigerians.”

It is now a crime for two gay people to meet, to operate or go to a gay club, or other gay organization.