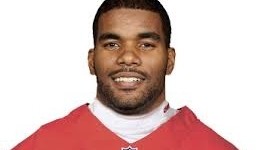 Born in San Antonio, TX,
Quintin Demps was rooted in the Christian faith as his mother and extended family centered their foundation through the holy word of God. In high school, Demps led his team to the district title and later became an All-State Honorable Mention selection, which earned a football scholarship to the University of Texas at El Paso (UTEP) where he later went on to garner first-team All-Conference USA honors. It was at UTEP where Demps began to explore his music talents, which led to him to create his first independent record label, Red Shirt Records; however he was forced to shelf his music aspirations, when UTEP assigned him a starting position for the football team. Upon earning his Bachelor of Liberal Arts in 2008, Demps entered the NFL Draft and was selected in the fourth round by the Philadelphia Eagles. After serving a brief stint with the United Football League’s Hartford Colonials, Demps rejoined the NFL in 2010 as the Safety for the Houston Texans, before signing with Kansas City in 2013.With his career back on track, Demps committed himself to his purpose and began utilizing his NFL image as a platform to share his testimony in hopes to inspire youth and young adults. In 2012, Demps founded Purpose By Faith Music Group and began writing and recording original music. In 2013 Demps joined the Testimony Tour, where he was able to share his testimony and music to provide a positive influence on others’ lives. Continuing to serve his purpose, Demps is a successful public speaker and has shared his testimony and given motivational speeches to churches and youth-based organizations. When not on the field, he is working on his first solo album to be released in 2014.

Dra: In your early years you had a rough time staying on a roster what was your motivation to keep on?

QD: I was raised better than that, there is no quit in me. I didn’t get cut because I couldn’t play, it was because of numbers. I knew my time would come. I believe I was cut so God could mold me and shape and build my character cause I was dealing with some things, struggling with some stuff. I wouldn’t change it if I could go back.

Boston Joe: This is your second record label, I was wondering how did you come up with the name Purpose By Faith?

QD: I came up with the name Purpose By Faith cause I was cut and by being cut I didn’t know what was next for me in my life. So I began to search for my purpose and go after God for what He created me for. And the only way you can find out what you were created for is go to the Creator. And by going to the Creator you got to have faith. And pursuit of my purpose trying to find it by faith. So purpose by faith go hand and hand like that.

Dra: This first single No Struggle I listened to it about 10, 12 times in a row it’s hot. Where did you come up with the concept No Struggle?

Boston Joe: What kind of message do you want to bring to the music industry?

QD: A message of hope, inspiration, to the generation that life is not about smoking weed and going to the strip clubs. I want it to be opposite of what the culture is now.

Dra: What kind of artist are you looking for in the talent search?

QD: I’m looking for anyone with talent. People that has been overlooked by a big record label. Someone that is confident and very good at what they do. Singers or rappers.

Boston Joe: Leave us with a positive thought we can all feed off of.

QD: All things work together for the good of those who love Jesus are called according to His purpose. So no matter what you are going through it’s all working together for your good.

Interview by Boston Joe and Dra White of Kingsmen Media

Next post A Very Pregnant Kerry at the Golden Globes

BodyArmor, the sports drink company that hit the ground running after a $6 million investment by (more…)