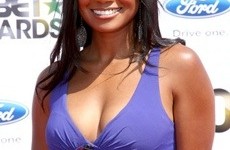 Fifteen years after her debut album, Tatyana Ali is back on the music scene with a new EP entitled HELLO. Six new songs written and produced by Ali showcase the more grown-up and sexy side of the talented actress, who just released a short film to introduce her fans to the album.

Hello, the short film can be viewed here:

Recently nominated for a 2014 NAACP Image Award for her role as Roxanne on The Young & The Restless, on January 21st, Tatyana will be the featured Artist on SPOTIFY, where fans can exclusively purchase the album before it’s available on ITunes.