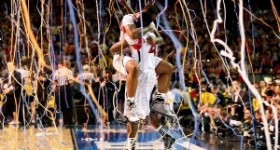 The prize will be paid in 40 annual installments of $25 million and split among multiple winners if there is more than one perfect entrant, the Detroit-based lender said today in a statement. The winner also has the option of a single payment of $500 million.

Berkshire has specialized in unusual insurance risks for decades, protecting clients against big losses in return for premium payments. The Omaha, Nebraska-based company won a bet in 2010 on the World Cup after France was eliminated from the tournament in South Africa. Berkshire has previously guaranteed against the potential payout of $1 billion in a contest sponsored by PepsiCo Inc.

“We’ve seen a lot of contests offering a million dollars for putting together a good bracket, which got us thinking, what is the perfect bracket worth?” Quicken Loans Chief Marketing Officer Jay Farner said in the statement. “We decided a billion dollars seems right for such an impressive feat.”

The 68-team, single-elimination tournament begins in March. Submissions will be limited to one per household and capped at 10 million entrants, according to

The odds of picking every winner correctly in a 64-team bracket are less than 1 in 9 quintillion, according to Jeff Bergen, a math professor at DePaul University in Chicago. Even with some basketball knowledge, that only improves to about 1 in 128 billion, he said in a video posted on YouTube.

“If you’re just guessing, you basically have no chance,” Bergen said in the video.

If every person in the U.S. knew something about basketball and filled out a bracket, the probability of someone picking each game perfectly is less than 0.25 percent, he said.

The NCAA men’s basketball tournament, known as “March Madness,” is among the most-watched sporting events in the U.S. The championship game last year attracted 23.4 million viewers, CBS Corp. said in April after the University of Louisville defeated the University of Michigan. CBS and Time Warner Inc.’s Turner Broadcasting agreed in 2010 to a $10.8 billion, 14-year contract for broadcast, Internet and wireless rights to the tournament..jpg”>