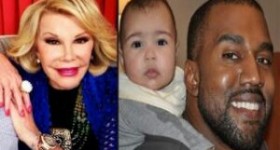 Joan Rivers joked about seven-month-old North West, the daughter of Kim Kardashian and Kanye West, as part of her latest comedy routine. And she didn’t have anything nice to say about the adorable, famous baby.

Joan explained how she had met North when Kim brought her into the offices of E!, where she hosts the popular show “Fashion Police.” According to RadarOnline, Joan told her audience: “That baby is ugly ..