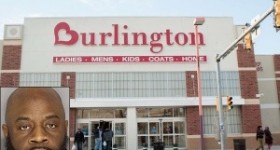 Father Marvin Francis, 39, received a call from store security. They told him that his son had allegedly been caught stealing. When Francis arrived at the store, according to authorities, he picked up a broom that was on display and began to beat the teen with it repeatedly.
And it did not stop there.
According to the Philadelphia Daily News, Francis took a break from beating his son with the broom only to drag him out onto the sidewalk where he could beat him some more; this time, beyond consciousness.
“He beat him like a piece of meat,” said Upper Darby Police Superintendent Michael Chitwood to the Philadelphia Daily News.
“As he’s walking in, he picks up a broom in the store from a sales display and walks into the security office and starts beating his son with the broom,” Chitwood explained. ”Then he throws the broom down and punches, kicks and knocks the kid to the ground.”
Chitwood continued, “The next thing you know, he’s outside of the store and he starts punching him and beating him again. This time he knocks him down, stomps him in the head and knocks him unconscious.” The entire incident was caught on tape.
According to the Philadelphia Daily News, following several failed attempts to revive his son, Francis slung the teen over his shoulder and put him into the back of his Lexus. Store security never called authorities according to Chitwood. It was a shocked witness that made the call.
By the time the police located Francis, his son had regained consciousness. But that did not prevent the father’s arrest. His bail is $100,000 and he is currently residing in Delaware County Jail after being charged with aggravated assault and other charges, as reported by Originalpeople.org.