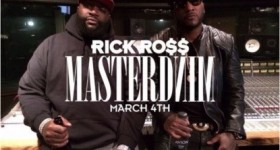 On Friday, Rick Ross revealed the cover art for his sixth album, ,Mastermind, with an explosive trailer that teases a new single called “War Ready,” with his one-time rival Jeezy. The teaser certainly plays up the magnitude of the collaboration, telling fans that the album will be “featuring the hit single the streets have waited years for.”

The news was quite unexpected, considering Rozay and the Snowman’s recent history.

In 2011 Jeezy told MTV News that the tension started when Ross interpreted his freestyle “Death B4 Dishonor” as a dis response to “B.M.F.,” adding that things spiraled further thanks to a skewed video posted on WorldStarHipHop.

Fast forward to September 2012 and the issues got physical when the rappers finally ran into each other at the BET Hip-Hop Awards. A backstage shoving match spilled out into the parking lot where gunshots erupted before things were broken up.