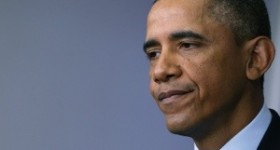 Power of the pen? President Barack Obama will announce Tuesday that he is ordering an increase in the federal hourly minimum wage to $10.10 for workers on new federal government contracts for services, like janitors and construction workers, according to the White House.

Obama will lay out his executive order in the State of the Union address at 9 p.m. before a joint session of Congress and urge lawmakers to join him in raising the minimum wage for all workers.

The move highlights some of the president’s main messages in the annual speech, notably his vow to work with Congress when he thinks it’s possible and use his executive powers to go around them when he considers is necessary. It also reflects a longstanding Democratic belief that raising the minimum wage will brighten the fortunes of millions of Americans.

Republicans have long countered that raising the hourly rate will lead employers to shed jobs.

The White House did not provide a detailed breakdown of the categories of workers chiefly affected, or the states that are home to most of these employees. But it could potentially sends ripples through states – including some hosting pivotal contests in the November mid-term elections — that have a large military presence.

“Some examples of the hardworking people who would benefit from an EO (executive order) include military base workers who wash dishes, serve food and do laundry,” the White House said.

The downside of Obama’s executive order is that what he accomplishes with the stroke of a pen, one of his successors could undo with similar ease. But Democrats argue that the president has little choice in the face of stiff opposition to his agenda from the Republican-held House, which has shown no inclination to embrace his agenda.

In his 2013 State of the Union, Obama called for legislation to raise the minimum wage to $9/hour, but did not flex much political muscle to make that happen. The measure stalled.

The White House announcement underlined that Obama “wants to work with Congress” to pass a bill that would increase the federal minimum wage to $10.10/hour and keep pace with inflation thereafter.

“The president has also looked at what he can do through executive action to help raise wages for hardworking Americans,” it said. “In the State of the Union Address, the President will announce that he will use his executive authority to raise the minimum wage to $10.10 for those working on new federal contracts for services.”

Anticipating the GOP counter-argument, the White House said that “boosting wages will lower turnover and increase morale, and will lead to higher productivity overall.”

Meanwhile, “raising wages for those at the bottom will improve the quality and efficiency of services provided to the government,” it said. And “the wage increase will be manageable for contractors. The increase will take effect for new contracts after the effective date of the order, so contractors will have time to prepare and price their bids accordingly.

One thought on “Obama ups minimum wage for some government contractors”