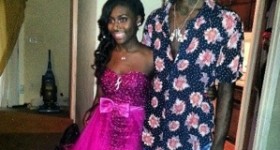 Atlanta rapper Young Thug is blowing up. If you’ve been to the club or listened to urban radio recently you’d know his massive street song “Danny Glover” has taken off like a rocket. Thug’s 2013 breakout mixtape “1017 Thug” on Gucci Mane’s 1017 Brick Squad record label received rave critical acclaim and appeared on many top ten lists. In addition, “Danny Glover” has been cosigned by major mainstream artists like Drake and Kanye West. But the Kanye cosign isn’t merely for “Danny Glover” as Young Thug told Complex in an interview, he’s also currently working with the Chicago rapper/producer.

“I mean, I went to his house and we did a couple of songs,” Young Thug said during an interview with Complex. “The fact that I was [making songs] so fast amazed him too, because he doesn’t see a lot of people who rap like that. I don’t really rap with a lot of people [because] everyone raps the same way. When I first heard he wanted to know who I was and do songs, I was smiling ear to ear like a clown.”

And though Young Thug is working with Kanye West, Thug revealed he’s “a big fan of everything that” Kanye has done as an artist. But despite admiring Kanye, he still supports Lil Wayne, and hopes to work with him above anyone else.

As mentioned, Young Thug is signed to Gucci Mane’s 1017 Brick Squad label but Thug is also rumored to be getting love from other labels. It has been rumored Future’s Freebandz imprint is interested in the 21-year-old. “It’s not happening yet, I don’t know if it’s gonna happen,” Thug said. “Future said he wants to give me $1.5 million so you know how that goes. It just hasn’t happened yet.”