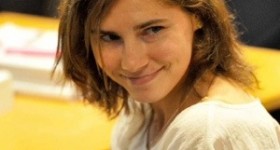 FLORENCE, Italy (AP) — An appeals court in Florence has upheld the guilty verdict against U.S. student Amanda Knox and her ex-boyfriend for the 2007 murder of her British roommate. Knox was sentenced to 28 1/2 years in prison, raising the specter of a long legal battle over her extradition.

After nearly 12 hours of deliberations Thursday, the court reinstated the guilty verdict first handed down against Knox and Raffaele Sollecito in 2009. The verdict had been overturned in 2011 and the pair freed from prison, but Italy’s supreme court vacated that decision and sent the case back for a third trial in Florence.

While Solecito was in court Thursday morning, he didn’t return for the verdict, and Knox was half a world away awaiting the decision with, in her own words, “my heart in my throat.”

Previous post Preachers of Atlanta is Here! Will you watch it?