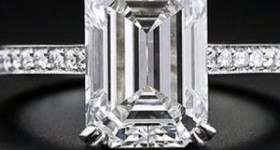 Rumors have been swirling for awhile that P. Diddy and girlfriend Cassie are engaged, but now there’s some pretty solid evidence. Over the weekend, the producer posted a photo of a huge engagement ring on Instagram. “Baby, do you like it? I just want to get you wat you Like ! I just wanna Mk you smile 🙂 #takeDat.![sic]” he wrote as the photo caption.

And later on in the night, singer Keyshia Cole posted a blurry photo alongside Cassie, who had a ring on her wedding ring finger.