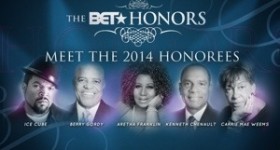 Aretha Franklin has been a central figure in music for over five decades. Her musicality and vocals act as the standard for the many musicians she has inspired and throughout the years fans prove they want their Aretha! With countless hits that have earned her over 18 Grammys and an induction into the Rock & Roll Hall of Fame, 2014 will see the legend add another accolade to her shelf. Watch the BET Honors Monday, February 24 at 9P/8C as she takes the stage to accept the Musical Arts Award.

ICE CUBE – ENTERTAINER AWARD
Ice Cube is “Straight Outta Compton” and proves that one can rise out of impoverished and gang-infested environments to realize greatness. Since the 1980s the N.W.A alum has conquered the music world with over 10 million albums sold. Music isn’t all. In ’95 he quickly turned to film to showcase his film making talents as the star and creative force behind the comedy Friday. He continues to claim his stake in the entertainment world across all mediums with no signs of slowing down.

CARRIE MAE WEEMS – VISUAL ARTS AWARD
Visual artist Carrie Mae Weems’s body of work showcases the depth and multiplicity of the human experience. The Oregon native rose to the fore of the photography world with works such as the comedic Ain’t Jokin’ and the thought provoking The Kitchen Table series, which earned Weems awards and critical claim. Carrie Mae Weems is what extraordinary looks like.

Berry Gordy, cultural icon and founder of Motown Records has made unparalleled contributions to music and American history. He is responsible for acts such as Smokey Robinson, the Jackson 5 and Diana Ross and the Supremes. His musical legacy was instrumental in his signees shattering racial barriers with their music that boasted mass appeal and introduced the world to the “Motown Sound.” Successful in every venture he has chosen to embark on, Gordy is also a filmmaker, songwriter and civil rights activist.

KENNETH CHENAULT – CORPORATE CITIZEN AWARD
Kenneth Chenault began his career with American Express in 1981, soon becoming the subject of a series of promotions he’s proved his worth as a savvy, refined and forward-thinking leader. In 2001, after assuming the role of CEO, he has led the Fortune 500 entity to unprecedented success and continues to be a resounding example of what extraordinary looks like.