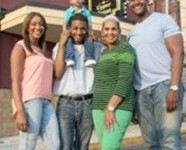 (LOS ANGELES) February 14, 2014 – Sassy soul food entrepreneur Miss Robbie Montgomery and her rambunctious family are returning to OWN on March 15 at 9 pm ET/PT for another lively season of the NAACP Image Award-winning docu-series “Welcome to Sweetie Pie’s.”

In the new season, the former Ikette and her “Sweetie Pie’s” restaurant franchise experience business growing pains as her son, Tim, attempts to expand their soul food empire beyond St. Louis with a new restaurant in Houston, Texas, and launch a new bottled tea line with the potential to grow their brand nationally. Miss Robbie’s nephew, Charles, is torn about whether to pursue his fledgling acting career or continue trying to move up in the family business, while niece, Monique, expresses interest in taking over the Mangrove restaurant as manager if Tim moves to Texas. Meanwhile, Tim and Jenae appear to have found a comfortable balance as co-parents to their son, TJ, until Tim’s business ambitions and emotional distance bring their relationship to a breaking point. Through it all, Miss Robbie tries to juggle three restaurants, write a cookbook and manage both family and staff. But when her younger brother falls ill, the family’s matriarch puts everything else on the backburner: because in the end, family is what really matters.