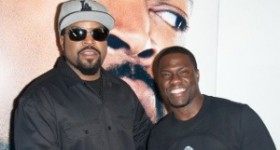 Deadline is reporting that the deal for Ride Along 2 has just closed and it will reunite its red-hot star Kevin Hart and Ice Cube, plus director Tim Story and producer Will Packer. The cast and crew are set to assemble for a shooting start date of late June or early July of this year.

Ride Along marks the fourth film the sizzling, red-hot Hart is starring in this year. His other movies include the box-office hit of this past weekend About Last Night, the upcoming School Dance, and the much-anticipated sequel Think Like a Man Too, also produced by Packer.

As of this past weekend, Ride Along has earned over $120 million worldwide, so it’s a safe bet its sequel should also enjoy a healthy and lucrative lifespan at the box office.