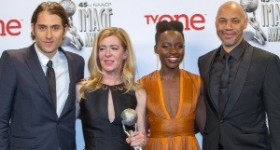 “12 Years a Slave,” director Steve McQueen’s harrowing depiction of slavery in America, won top motion picture honors at the 45th NAACP Image Awards on Saturday evening at the Pasadena Civic Auditorium.
Lupita Nyong’o won in the supporting actress category for her role in “12 Years,” and in a separate ceremony Friday evening, McQueen won the Image Award for director and John Ridley for the film’s screenplay.