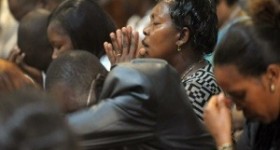 Pastor in Kenya has reportedly banned women from wearing underwear to church in order to receive Christ “free in body and spirit”.

Sounds like a Pervert to me because he didn’t include the men. I guess they can’t get to Christ!

The pastor added there would be grave consequences if his female members did not adhere to the new rule, which was reportedly adhered to as most women are said to have attended the next service with no underwear.

3 thoughts on “Pastor tells the Ladies to Come to Church and leave Those PANTIES at home!”