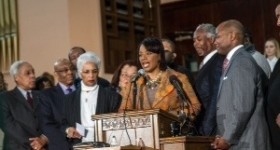 Saying that she has already won “the moral high ground,” Bernice King said she would surrender her father’s Nobel Peace Prize and Bible until a court decides whether or not her brothers, Dexter King and Martin King III, should be allowed to sell them.
“I have been led by the Holy Spirit to comply with the court order,” Bernice King said Thursday at a press conference at Ebenezer Baptist Church. “This is not a set back, but an opportunity for my brothers to do what their conscience says is right.”
Last month, Fulton County Superior Court Judge Robert C. I. McBurney ordered Bernice King to surrender the items to the King Estate for safekeeping until he makes a ruling.
In January, the trustees of the King Estate voted 2-1 to sell the items. Bernice King voted against her brothers, Dexter King and Martin Luther King III.
She had refused to give up the items and is being sued by her brothers. The full hearing will take place in September.