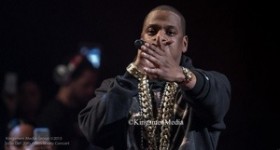 “Jay is Kanye’s closest friend so he wants him to be best man. Jay agreed initially but had one condition-under no circumstances can there be any reality TV shows filming him, his wife, Beyoncé or daughter Blue Ivy during the ceremony… The thought of popping up in KUWTK mortifies Beyoncé. She purposefully keeps herself away from trashy TV and isn’t prepared to lower her standards for anyone, or any occasion… Bosses at E! are desperate to get the nuptials on air, and will pay millions to make it happen.”