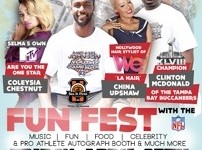 J93 Fund announces that the Tampa Bay Buccaneers and free-agent defensive end Michael Johnson agreed to a five-year deal worth $43.75 million. The proud Selma, Alabama native participated in an official press conference where all the team’s newly signed free agents were introduced to the sunny city of Tampa.
Buccaneers.com Senior Writer Scott Smith describes the impressive DE as “One of the most coveted players on the market at any position,” Smith adds, ” He agreed to a five-year contract with the Buccaneers, marking the first time Tampa Bay has dipped into the free agency market to find a pass-rusher since 2008.”
According to the always humble Johnson who will now sport jersey #90, “I’m excited to be part of an organization that already has so many great pieces in place. I consider it a blessing and a great opportunity to build with these guys down here.”