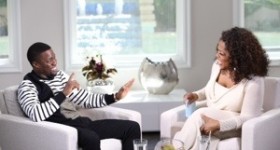 Oprah Winfrey meets up with comedian and actor Kevin Hart on the heels of his box-office hits and recent NAACP Image Award for “Entertainer of the Year” to discuss his skyrocketing career. Hart discusses his comedic influences and how reaching his fans through social media was a vital part of his success as he made his way up in the industry. Hart also talks about raising his children with his ex-wife, the support his mother gave him when he was first starting out and how he learned to forgive his father.

Oprah meets up with comedian and actor Kevin Hart to discuss his recent blockbuster success. Kevin also shares how reaching his fans through social media has been a vital part of his success.
Tune in for an all-new episode of Oprah Prime on Sunday at 9/8c.

One thought on “Oprah Prime: Kevin Hart airs this Sunday, March 23 at 9 p.m. ET/PT on OWN”