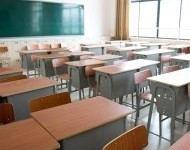 Multiple people between the ages of 15 and 60 were stabbed by a student at a school outside of Pittsburgh this morning, according to reports. The attack occurred just after 7 a.m. at Franklin Regional High School; a suspect is in custody. “A critical incident has occurred at the high school,” reported the district’s website. “All elementary schools are cancelled, the middle school and high school students are secure.” While the situation is still developing, NBC reports as many as 20 people were hurt.