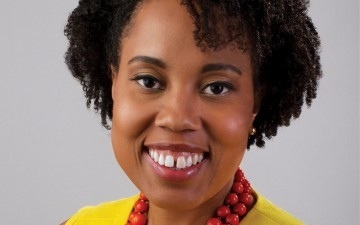 CHICAGO (April 22, 2014) — Desiree Rogers, CEO of Johnson Publishing Company (JPC), today named Mitzi Miller as the new editor-in-chief of EBONY magazine, effective immediately.
Miller, most recently served as editor-in-chief of JET magazine, a post she had held since May 2011. Wendy Wilson, the current managing editor of JET magazine, will now oversee the day-to-day operations of JET magazine.
“Mitzi is a gifted editor with tremendous energy and passion, and her strong editorial background will catapult the EBONY brand to greater heights,” said Rogers. “We are thrilled to have Mitzi in our JPC family and are excited to see the new direction she will bring to the magazine.”
“I am extremely humbled to be trusted with the responsibility of leading the number one African-American publication in the country,” said Miller. “Amy Barnett is an exceptional editor, and I am honored to succeed her as editor-in-chief at EBONY. I am excited about all the possibilities as I assume my new role.”
While at the helm of JET magazine, Miller revamped the iconic 62-year-old brand with the magazine’s first and only successful redesign, re-launch of the Jet website and an increased social media presence. An award-winning journalist and bestselling author of five books, Miller is regularly a featured guest on several national television programs, including ABC’s Good Morning America, TV One’s News One Now with Roland Martin, MSNBC’s Melissa Harris-Perry and CNN’s CNN Newsroom.
Prior to joining JET, Miller served as the editor-in-chief of SET Magazine. A former associate editor at JANE Magazine, she began her editorial career in 2001 at HONEY magazine. Miller holds a Bachelor of Arts degree from Florida A&M University and currently sits on the Jack & Jill of America Foundation Board. Her recent accolades include recognition among The Root 100 honorees for 2013, Florida A&M University’s 125 Outstanding Alumni of the Quasquicentennial, and Crain’s Chicago Business Magazine’s 2011 40 Under 40 roster.
Miller succeeds Amy DuBois Barnett, who is leaving EBONY after serving as editor-in-chief since 2010.