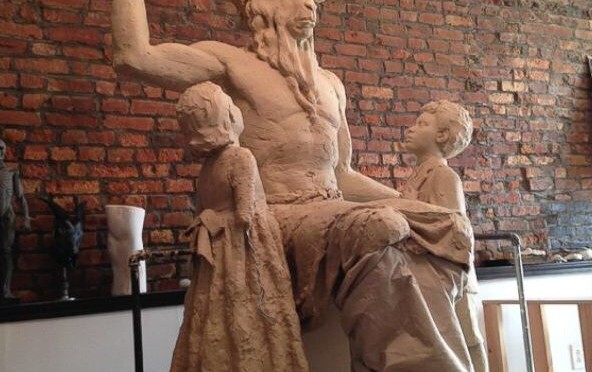 A Satanist statue cast in bronze is just months away from completion, and activists hope that it will find a home on the lawn of the Oklahoma State Capitol. Ultimately, the statue — which features the seven-foot tall, horned figure of Baphomet fawned upon by two exultant children — is intended to stand directly next to a highly controversial monument of the ten commandments that was donated by a state legislator in 2012 and subsequently placed on the grounds of the Capitol.

The Baphomet figure, complete with a goat head, angel wings, and a beard, comes from a recently-formed New York group identifying as The Satanic Temple, which raised over $28,000 on Indiegogo earlier this year to commission a sculptor and create the piece. Satanic Temple spokesperson Lucian Greaves tells ABC News that the statue is a symbol to “celebrate our progress as a pluralistic nation founded on secular law.”