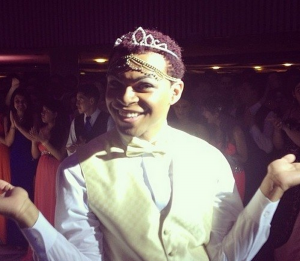 In a scene straight out of Glee, high school junior Nasir Fleming was crowned prom queen at his junior prom even though he is a male.
The 17 year old student at Danbury High in Danbury, Connecticut said that he never expected to actually win the crown. He is very candid about his s*xuality and has been that way since the sixth grade. He is a very popular student at school. Other classmates had nominated him for both king and queen. When he won the crown there was thunderous applause from the audience.

Fleming stated that he thought his classmates were more excited than he was for his big win. It is hard to tell sometimes whether the nominations for prom queen were done seriously or to mock Fleming, but either way he says that he is still “fabulous” and is happy. He is hoping that this will make a statement about gay youth and that you need to be who you are without fear. He wants to spread a message that if someone like himself, who identifies as a male, can win a title in the opposite gender there is no reason a transgendered person cannot do the same.

He posted the video of his crowning on Youtube and while it has garnered positive comments from many different people, criticism was still there. Fleming states that it was sad to see people who were grown adults attacking a teenager for something like this. Some were attacking the school for allowing this to happen. Some attacked Fleming’s lifestyle. He says that he just lets it roll off of his shoulders. He knows who he is and he is happy with his life. Just because other people don’t feel the same does not mean that he should have to change who he is.