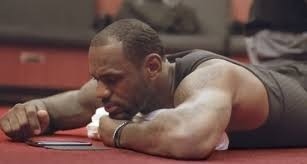 The air conditioning at the AT&T Center malfunctioned and the San Antonio Spurs rolled to a Game 1 victory in the NBA Finals Thursday night. They used a 31-9 run at the end of the game to cruise, but the biggest story of the night came from a thermometer.

With the air conditioning on the fritz, ESPN sideline reporter Doris Burke held a thermometer that said over 90 degrees during the fourth quarter.

“I don’t think I played in anything like this since I left the islands,” joked Tim Duncan, who grew up on the Virgin Islands.

It was then that James became cramped. He asked out a few different times, but he left for good midway through the final 12 minutes. He was carried off the floor. He didn’t return and his Miami Heat fell one behind in the race to four wins.

The Spurs released a statement in the second half.

“An electrical failure for the power that runs the AC system in the AT&T Center has occurred,” the statement read. “We are continuing to work on resolving the problem. We apologize for any inconvenience.”

Doubtful LeBron and the Heat accept the apology. They also weren’t using it as an excuse or crutch.