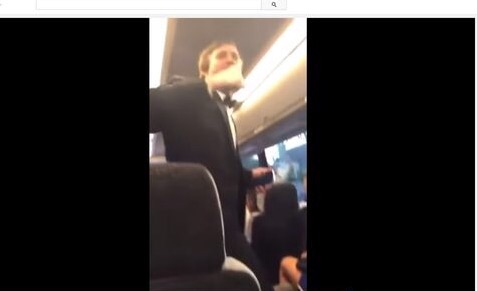 Students marched on the campus of the University of Oklahoma on Monday to protest a video apparently showing Sigma Alpha Epsilon fraternity members at the Norman campus participating in a racist chant.

Sigma Alpha Epsilon’s national headquarters said Sunday night that an investigation had validated the contents of a video showing multiple people chanting a racial slur against blacks and indicating that blacks would never be admitted to the fraternity’s chapter in Norman. The chant also references lynching.

SAE said the fraternity chapter at the school has been closed and its members suspended from the national organization.

“We apologize for the unacceptable and racist behavior of the individuals in the video, and we are disgusted that any member would act in such a way,” the national fraternity said in a statement. “Furthermore, we are embarrassed by this video and offer our empathy not only to anyone outside the organization who is offended but also to our brothers who come from a wide range of backgrounds, cultures and ethnicities.

On Monday, the building had been vandalized with graffiti. On one side of the building, in huge letters, was written “Tear it D.” Two unidentified chapter members told The Oklahoma Daily, the student newspaper, that they had received death threats.

The video was posted online by a black student group at OU, Unheard. It wasn’t immediately clear how it was obtained.

University President David Boren Tweeted a statement condemning the video and saying the university was investigating.

“I have been informed of the video, which shows students engaging in a racist chant. We are investigating to determine if the video involved OU students,” Boren said. “If OU students are involved, this behavior will not be tolerated and will be addressed very quickly. If the reports are true, the chapter will no longer remain on campus. This behavior is reprehensible and contrary to all of our values.”

The national fraternity’s decision to close came on the same day thousands of people gathered in Selma, Ala., to mark the 50th anniversary of “Bloody Sunday,” a day in 1965 when peaceful protesters marching for voting rights were beaten by police.