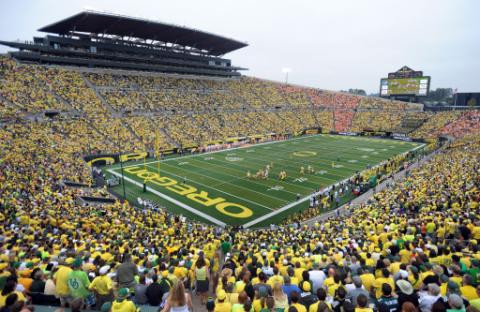 Multiple Oregon football players have been hospitalized as a result of intense strength and conditioning workouts.

According to The Oregonian, at least three Ducks players — offensive linemen Doug Brenner and Sam Poutasi and tight end Cam McCormick — are listed in fair condition at a hospital just outside Eugene and have been there since late last week. Poutasi’s mother told The Oregonian her son has been diagnosed with rhabdomyolysis.

Poutasi’s mother, Oloka, said that her son complained of very sore arms after the workouts and had been diagnosed with rhabdomyolysis, a syndrome in which soft muscle tissue is broken down with “leakage into the blood stream of muscle contents,” according to the NCAA medical handbook. Depending on the severity, it has the potential to lead to damaged kidneys.
“The safety and welfare of all of our student-athletes is paramount in all that we do,” Oregon wrote in a statement on behalf of the entire athletic department. “While we cannot comment on the health of our individual students, we have implemented modifications as we transition back into full training to prevent further occurrences. We thank our medical staff and trainers for their continued monitoring of the students and we will continue to support our young men as they recover.”